without being able to precisely define its role or predict the future in the short and medium term. For the occasion, 44 Heads of State and representatives of the continent met in Prague, the 27 members of the European Union and 17 other States which may or may not be candidates for EU membership. Among them, candidate states for EU membership were present such as Ukraine, Turkey, Serbia and Moldova. Others, who do not wish to join, were also there (United Kingdom, Norway, Azerbaijan).... 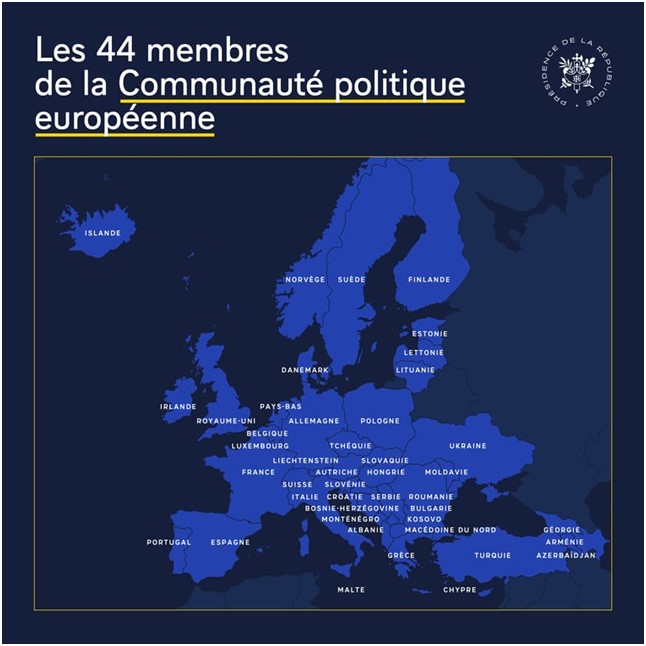 The idea of this CPE is hardly new, already in 1989, F. Mitterrand, President of the Republic had launched the idea of a European Confederation going beyond the framework of the EU. This project was quickly shelved under pressure from the United States, which did not want the organization of a common area of cooperation between Western and Eastern Europe after the disappearance of the USSR. . Their objective being to weaken and divide as much as possible, the States resulting from the ex-USSR and especially Russia. Note that this objective has not changed, particularly with regard to Russia.
This new CPE, which was born in a new context, that of the war in Ukraine, looks like an attempt to form a political bloc against Russia and Belarus. The map above published by the services of the Presidency of the Republic shows this eloquently. From this point of view, the intervention of the Ukrainian president was a clarifying element calling for "punishing the Russian aggressor" and "preventing his tanks from going to Warsaw or Prague".
If the mobilization of the European imperialist camp takes a broader turn compared to the current perimeter of the EU and NATO, for its European part, it is possible to identify divergent interests. Those who oppose Greece and Turkey over the sovereignty of islands have even been the subject of a clash between the representatives of these States during the official banquet. In the end, moreover, no joint declaration emerged from this meeting, nor did any specific commitments on the follow-up to be given to it.
The day after this EPC, a summit of EU leaders was also held in Prague on energy issues, their supply and the capping of gas prices. Two major questions that divide European countries as their interests diverge on these subjects. Despite the declarations of unity, it is rather every man for himself and the recent choice of Germany to massively finance its economy with its shield of 200 billion euros in favor of its companies sounds like a way to gain in competitiveness. faced with the economies of other European countries unable to align such sums. At the same time, Germany, which fears for its supply, opposes the limitation of the price of gas demanded by the most economically fragile states.
The imperialist war in Ukraine therefore weighs very heavily on European economies and increases competition between monopoly groups to secure market shares. Energy issues, through the place they occupy in the economic, social and political life of Nations, as well as their major importance in international relations, are at the heart of class clashes on a national and global scale. They largely determine the conditions of economic and social activity over long periods of time in a context of capitalist domination of productive activities and exacerbated clashes within the imperialist system.
Although it is clear that strategies in the energy field are measured over decades and in large geographical areas, the fact remains that France must adopt its energy policy based on its potential and its resources. clean. It must, as it is doing in the ITER(1) project (International Thermonuclear Experimental Reactor: International Thermonuclear Experimental Reactor) increase its share in international cooperation for the development of reliable and stable energy sources, which implies the development of scientific and technical research. For decades, after the electricity sector was nationalized at the liberation, the policies pursued by all governments have converged on selective privatization aimed at ensuring rising rates of profit for capital in the most profitable segments and especially in distribution. The energy transition is no exception to this trend, it is even a component of it. Continuing on this path is dangerous for national independence and the ability to meet social needs. In this area as in all others, the choice is not in the development of capitalism but in the struggle to put an end to this system of exploitation. This is why our party is fighting, in the immediate future, to stop the dismantling of the public service and the statutes of its personnel and more fundamentally for a total nationalization of the energy sector on the basis of a policy aimed at using all our assets and in particular nuclear power. It is in this sense that we intervene for a policy of national independence and cooperation on mutually advantageous bases for the peoples.

At the heart of Africa on the move: Burkina Faso
Burkina Faso, a former French colony until 1960, has just experienced two coups in eight months. It is the country where Thomas Sankara, Marxist-Leninist revolutionary led, with the people, from 1984 to 1987, an anti-capitalist policy of development before being assassinated by the imperialist forces. Since 2015, part of the territory, around 40%, has been under the control of jihadists: the GSIM, Support Group for Islam and Muslims, affiliated with Al Qaeda and Ansaroul Islam, a local jihadist group. These groups literally plunder the North and East of the country reducing the people to terror and famine. They took root in these regions where there were pre-existing tensions between farmers and herders for access to resources.
Head of State Sandaogo Damiba at the head of the MPSR (Patriotic Movement for Safeguarding and Restoration), came to power in January 2022, by a putsch motivated by the inability of his predecessor to ensure the security of the people against to jihadists. But their regular attacks continue to kill thousands and displace some two million people. Anger sets in among the people, fueling anti-French resentment and conducive to the growing influence of pro-Russian groups behind the Wagner group. The Minister of Defense is sacked and the post given to the President. This new regime satisfies neither the people nor the soldiers who had supported it in its accession to power. On September 26, a supply convoy to the martyred, besieged city of Djibo in the north of the country was ambushed by rebels, resulting in the deaths of eleven Burkinabe soldiers and the kidnapping of 50 civilians.
On Friday, September 30, at the end of a confused day during which the French Embassy and the French Institute were attacked, a group of soldiers appeared in front of national television cameras to announce the away from President Sandaogo Damiba, closing borders and suspending institutions until further notice. On October 3, on television, the spokesman for the MPSR declared that Ibrahim Traoré assumed the functions of Head of State, Supreme Head of the National Armed Forces and announced a transitional charter. From October 4, a delegation from ECOWAS(1) went to the capital Ouagadougou to meet I. Traoré and assess the situation. She was greeted by hostile demonstrators waving Russian flags to cries of "No to ECOWAS interference", "France get out", "Long live Russia-Burkina cooperation".
"National Assizes" bringing together the living forces of Burkina Faso and having to appoint a transitional president before the organization of state elections will be held on October 14 and 15, according to a presidential decree read Saturday on television. The Burkinabés are not fooled when it comes to the hand that still wants to hold the gag: capital that has its eye on the wealth of their country, oil, gold and, since recent discoveries, uranium and kimberlite(2) with multiple interests and full of promise. If Macron castigates the advances of Russia in Burkina and in other African countries, it is not to help the Burkinabé to exploit his own wealth himself but to allow multinationals to make super profits there. This new coup d'etat shows to what extent the African continent is at the center of the covetousness of the capitalist powers(3) . The people have nothing to expect from this change of guardianship and do not let themselves be taken in by the myth of a "new Sankara" myth created from scratch by capital to support Traoré whose orientations suit him. We support him in his fight to regain control of his destiny.

(1) ECOWAS: Economic Community of West African States, is a West African intergovernmental organization created on May 28, 1975. This structure is intended to coordinate the actions of West African countries. In reality, it is a capitalist construction responsible for protecting and promoting the capitalist interests of the former colonizers of the region.
(2) Kimberlite is a rock from ancient volcanic vents, many of which formed on the surface of the earth's crust during the Cretaceous. There are diamonds there.
(3)https://www.sitecommunistes.org/archives/ch458afrique.html