We are celebrating this year the 150th anniversary of the birth of Vladimir Ilyich Ulyanov known as Lenin, who left his mark on the 19th and early 20th centuries.
He marked them both through his role as a Marxist theoretician and philosopher, continuer of the work of Marx and Engels and also as revolutionary leader, soul and organizer of the construction of the Bolshevik Communist Party and of the great socialist October revolution in Russia.

His name is forever associated with the achievement of national and human liberation for peoples, embodied by the formation and then the development of the USSR.

It was because he understood and analyzed the nature of imperialism that Lenin with the Bolsheviks, under the conditions of a Russian empire engaged in the great confrontation within the imperialism of the time, knew how to and was able to lead the struggle of the proletariat and the masses in the direction of a revolution which broke the weak link of imperialism.
Facing these conditions, in the midst of the worst difficulties and massive foreign military intervention, the revolutionaries under his leadership, were able to defeat and establish Soviet power in 1917 . The strategic choices, starting with the electrification of the country followed by industrialization, allowed the rise of the USSR to the rank of a power capable of resisting imperialist pressures and playing a decisive role in the crushing of Nazism.
It was in these conditions that the communist parties were born all over the world. By breaking with the social democratic formations whose opportunism had led to support the imperialist war, they made it possible to constitute a world revolutionary movement. The existence of the USSR played an important role in the national liberation struggles that marked the second half of the 20th century and in the balance of power in favor of workers worldwide.

The disappearance of the USSR led to a decline in revolutionary forces. Many communist parties have turned into "left" parties which no longer challenge the domination of capital. Capitalism dominates the world economy and though the defeat of the USSR granted it a respite, competition and struggles within imperialism greatly intensify for the carving up of the world, the control of energy sources, of industrial or agricultural raw materials, control of communications, land, financial flows and workforce in a context of globalization of production dominated by large transnational companies. More than ever, the question of imperialism is decisive in the struggles waged by the working classes and the peoples for their liberation, to destroy capitalism whose damage is so great that it endangers humanity itself and build a society free from the exploitation of man by man: a socialist society. The theoretical contribution of Lenin’s work is fundamental confronted and developed from the realities of capitalism today in all its dimensions.
It is in this sense that our revolutionary party COMMUNISTES was created in 2002, because there no longer existed a revolutionary party in France; it based its affiliation in Marxism Leninism and established its relations with the communist parties throughout the world. 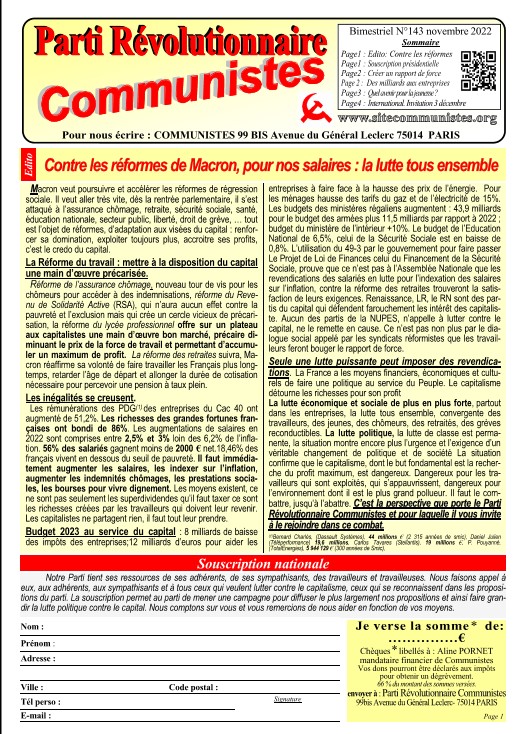